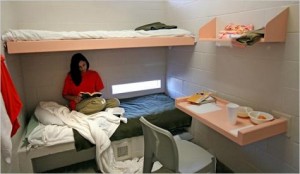 The Santa Ana Jail offers a variety of telephone services:

To send mail to inmates:

Mail for inmates should be addressed as follows:

Nursing services for inmates are currently available 24 hours per day.

On-site psychiatric counseling and dental services have also been implemented. The expansion of these medical services has resulted in fewer medical rejects at booking, fewer transports to the hospital, and a reduction of inmate grievances involving medical issues.

The Santa Ana Jail administers a Commissary program for the inmates.